I Am Free and Fluid – a Journey of Transgender Woman 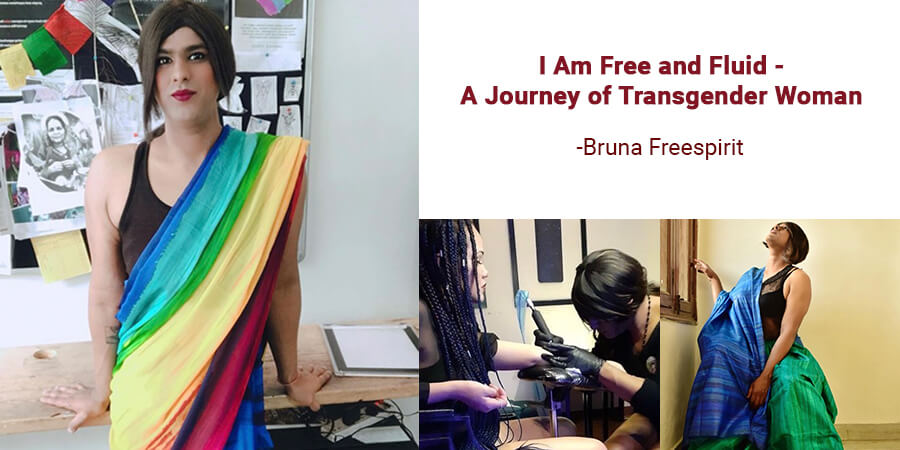 It was an early stage in my life when I realized a few things about myself. I did like feminine things. Talking, walking, dressing up, everything about a woman fantasizes me. Though I was born masculine, the femininity inside me was hiding behind. i was a transgender woman yet to be discovered.

The Early Stage of My Life :-

Even though i had discovered that i was a transgender woman, the society was not ready for it. It was and it is still frowned upon. the fear of that stopped me from coming out ever. i started to feel that maybe somewhere i am wrong, that maybe all this is my fault. feeling this way is not natural, something is defective about me and this shouldn’t be the case. all such thoughts kept revolving in my head.

I then decided to become this version I want for myself inside the four walls of my bedroom. Put on some jewellery, drape my mother’s saree, put on some makeup. I had now completely isolated myself and was living a double life. I started to live like a boy for the entire world and girl just for myself. It felt good. It felt okay.

The Early Stage of My Life Ii :-

For 25 years, I lived like a boy. For a fact I knew my dad would never accept me. Soon after he died, I came out to my mother expecting to understand me. But it did not turn out the way i thought. I wanted to live this side of me out in the open. I started to change my clothes while driving to work and changed coming back. But never got the chance to look at myself. Do I look beautiful? Do I need a little more lipstick?

I started visiting the restrooms in malls with those giant mirrors to see myself in those skirts and tops. I wanted to roam more in the public space. Past 10 in the night, i would wander in the parks in my beautiful dresses but soon some people mistook me for sex worker and that was it for my safety.

Now I Had to Accept Myself as a Transgender Woman :-

All this work i was putting in just to feel like a woman for a few hours in a day. I never got a chance to live like a woman for an entire day. I needed a safe space for that. I decided to take a solo trip. Those seven days were the most important days of my life. I slept being a girl and was still when I woke up. All the mornings were so serene. It felt like it was my reincarnation. Now I was sure that this is what I wanted in my life.

Being Bruna is my choice. Keeping it temporary is also my choice. I would never let the two entities over power each other. The Shiv part of me is a shy, apprehensive human. Whereas the Parvati side of me is bold, confident and courageous. The two personalities residing in me are poles apart.

Will the Society Ever Be Okay?

The conventions created by this orthodox society has led people seeing transgender in a certain way. A pessimistically peculiar perception is set by the society and is being spoon fed to the coming generations as well. Breaking this is going to take longer than anyone can imagine but someone has to do it. But I am not alone in this. Our entire community is going to rebel against it. This is my mission, to eliminate the pre adopted mindset about transgender. People who never had an encounter with transgender, conceptualize things about us that are far from true.

Some of my friends were against me, saying I was playing with nature. That was the last we ever talked. I have no room for confined mindsets. A transgender will know what a male goes through and what a female. I enjoy both sides.

A Little About My Art :-

I got invited to my friend’s tattoo studio opening. Indulging in some conversation and he hired me as the designer and marketing manager for his studio. I wanted to desperately learn it. I acquired a professional degree and started inking. I assumed being a transgender would be a big hinderance in my journey. Not everyone would like me inking. But it was quite contradicting. I have the most clients because they love my work.

In any other art form, people will see and maybe remember for a while but in my art form they will look at it and remember me for the rest of their lives. I think that it’s the best part.

I just believe in peace ‘jio aur jeene do’.