She can’t do it- I did every single time. 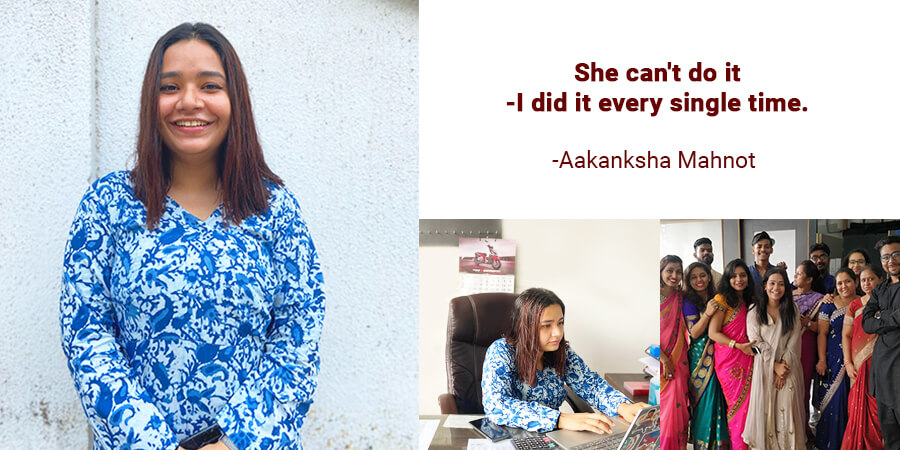 How could a 23-year-old girl be a Head Of Operations?

“The customer laughed on my face when I told him I was the person in charge here- I still face issues while meeting people for the first time. In my field, gender inequality is at its peak. Their jaws drop in wayward surprise, questioning themselves over how can a young girl be handling the responsibility of a HOO. I hope they find their answers through my work.

I had a very happy childhood. Being the youngest member of the family comes with its own benefits. My sister and I, both were very bright students and our parents have always been the most supportive kind. They never differentiated or restricted us because we were girls. All the members of my family are CA, so it was like an unsaid thing for me to enter the same field.

I FAILED FOR THE FIRST TIME EVER.

I cleared the first level with ease. At the time of the second, a close family member had passed away. The mental disturbance was so much, it made me flunk my exams. I had never failed in my entire life, this one just felt like a huge disappointment and it stuck with me for a really long time. I couldn’t gather the courage to give my exams again and so I dropped the idea completely.

At first, it felt weird to be the only person in my family, without a professional degree, and I was still finding my way through. My dad had recently entered into the automobile industry and took a franchise of one of the most prestigious brands in India. I started as a clerk, while my sister was handling the entire showroom. But since she was getting married soon, I took over. I had a hard time adjusting, not because I wasn’t capable enough but because the people around me weren’t happy with the fact that a 23-year-old girl had authority over them.

For the first year, no one really took me seriously, in fact, they didn’t even have the courtesy to save my number. They called my dad whenever they wanted to talk, and eventually my dad would call me. I had to introduce myself every time I called them, so it was a difficult period because I didn’t just have to run the place but also had to prove the fact that I was capable enough of the title.

A few of my customers were really unhappy with the fact that I was a girl, so even the smallest of error would be labeled as ‘bad customer service’. But some saw their daughters in me and were so delighted that they stayed to be customers for over years now.

MY PARENTS WON’T LET ME GIVE UP

Even after 3 years of working here, I have had to prove myself every single time and I don’t mind doing it. It keeps me motivated, and I love disappointing my critics. I am not perfect, no one can be. I made mistakes, a lot of them. But that is how we grow, don’t we? I guess it would have been easier if I were a boy, but my parents think otherwise. Every time I feel shattered or ain’t motivated enough, I come back home crying with wanting to give everything up. My mom just sits next to me and says “you will be stuck where you are forever if you don’t make mistakes because when you do, you also try to find a way through it, which cancels out making the same mistake again” and sends me back to work.

I always thought, what does my gender have to do with what position I hold. Why can’t people accept me the same way they would’ve accepted a boy. My staff would’ve felt better taking orders from a male boss, my colleagues would’ve helped me in my early stages thinking of me as one of them.

A DEATH THREAT WOULD SCARE ME?

All this and I still refuse to give up, I still refuse to be cornered even after receiving a death threat. A customer was adamant that his vehicle was damaged, so he came in with the request to exchange. I made him understand how the problem was normal and that the vehicle was already registered under his name. He went away for that moment, but the look on his face said that he would return. He came back the same day with men by his side and looked me in the eye and said “change my vehicle, or you wouldn’t see the daylight tomorrow”. Little did he know that I have some tricks down my sleeves.

I have put in so many efforts, have worked day and night to run my showroom, to not give people the chance to point fingers at me, but still, some people tell my dad, how immature it is of him to let me run a showroom, and that I would marry someday and go, that I was incapable of handling such a responsibility, my dad never said a word because he still believes in me and thinks my actions and my success will shut everyone up.

I don’t think I would be where I am today if it weren’t for my parents and my sister. All the mental and physical support I get is beyond my imagination. My dad sits with me every day, to ask me how my day was and what happened. It’s not a father-daughter moment, but more of a businessman to businesswoman talk. I love it.”