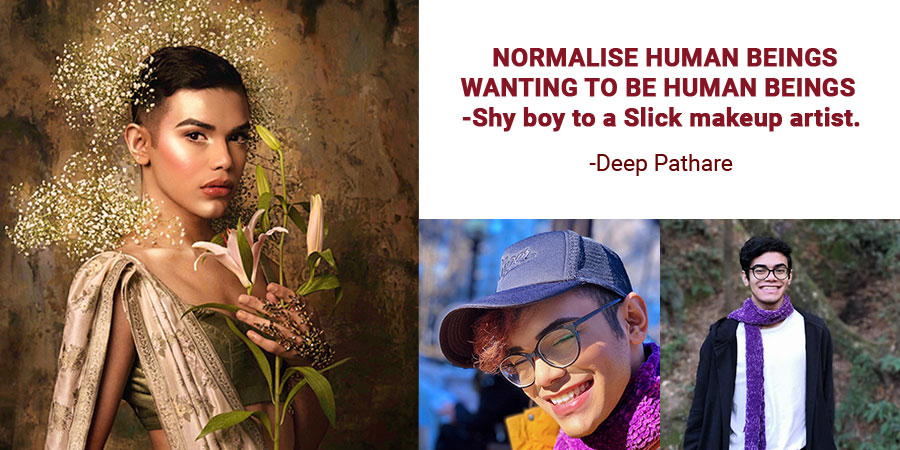 At the age of 13, I realized I wasn’t like other boys. There was something different about me, which brought in a lot of opinions on how I should be behaving according to society standards. As baffled as I could be, each year came with more mouths to tell me how it should be. It took me a long time coming out to myself.

I KNEW I WAS DIFFERENT, NOT WRONG:

For a lot of people, school life is one of the best memories to preserve. For me, it was the exact opposite. Growing up, nobody knew what was going on with me and neither did I. Being different didn’t turn in my favor. The bullying made me quieter day by day and took a toll on my mental health.

Anxious to find answers to my curiosity, I started researching and came across a blog. This woman, who had transitioned from a male to female, gave reasons as to when and how she figured this out. I couldn’t have resonated more. I did not have anybody to talk to this about as I had no friends. As I was researching more and more, I came to know about the existence of the LGBTQ community and that there are people who fall in love with the same gender.

IT WAS IMPORTANT I CAME OUT TO MYSELF FIRST:

With all this, I now had substantiated that I was gay. I felt different because I was different. It was not a misunderstanding. I have always been around strong female figures, which was the reason for the femininity in me. It was a wave of relief, but momentary.

I still wasn’t able to accept myself for who I was for a long time. It was at the age of 18, I had now all the way accepted myself, for what I was and this is how my life is going to be from now onwards. Because it was very important for me to accept myself first, as when you do, the fear of someone else harming you goes away. It took me longer to do so because I was apprehensive of my family’s judgment towards me. “what if they don’t accept?” haunted me for days.

I WAS ASTONISHED BECAUSE MY PARENTS WEREN’T:

It was in high school, I made some amazing friends who I knew I could come out to and when I did, they were the most supportive people of all. One of my closest friends actually pushed me to confront my parents about this. I finally did it, told my parents. The reaction I received was astonishing because they weren’t at all. They knew all this while, were just waiting for me to say it.

Now that it’s out in the open, they’re just more concerned for my safety, as society doesn’t provide as much as it takes away from people like me. I still, unintentionally, overhear people passing comments. It was heart-wrenching at first, but I realized those are people who’ll never have the courage to say something to my face, so I stopped worrying. They can gossip all they want because one day they’ll be gossiping about my achievements.

Further in my university days, I had the best 4 years of my life. My college has given me so much, from NYFW to the best of friends, I got it all. During one of the projects called UN GLOBAL GOALS, I took up gender inequality against the LGBTQ community. So I gathered a few men and put makeup on them. it was an instinct, I actually liked makeup. It came so naturally to me as I have seen the females of my house doing it.

This project got me very inclined towards makeup. I now wanted to normalize men wearing makeup and break the stereotype and stigmatization against them. So I started my journey as a boy who loved makeup.

IN THE END, I AM JUST A BOY WHO LOVES MAKEUP:

I started my own page and started posting pictures with makeup on. People actually liked it. I didn’t know why strangers were following me. Up until I reached 2000 followers, I had no idea what I was doing, or what life had for me. It was 31st December 2018, dancing to the beats of new year’s eve when a very renowned brand reposted my picture. It was the first time something like that had happened, my legs stopped moving. That was a very big deal for me and my life took a turn.

Now everyone started knowing my existence, which means I had to be actually serious about it if I wanted to create a name in the beauty community. I was loving my life, with my fashion designing, I was also doing makeup. I felt so content. But you know, with fame comes great criticism as well.

I now had started to receive negative comments, I was learning to deal with them when this thing happened. A death threat, yes. I had heard people getting it, but I never thought I would be at the receiving end too someday. We tracked down the Ip address and found out who it was.

It was a 14-year-old boy, I couldn’t have believed someone of that age had the capability of petrifying people. But I guess it’s easy sitting behind a phone and censuring others who put their heart, soul, and themselves out in the open. I decided not to go ahead with it, as I am in a great place in my life right now and I wouldn’t let anyone’s online frustration-spilling criticism hinder my peace.

I DECIDED I WOULD BE WHAT THEY SAID I COULDN’T BE:

All my life I was labeled to be a certain way, was told to behave a certain way but I would just like to say “Stop Labeling and Start Living“. Don’t confuse yourself more. Go with the flow, everything will fall into place as it’s supposed to be.

For people who are afraid of coming out: Take your time, once you accept yourself, it will be the most liberating feeling you will ever acquire. If you are forced to do so, make sure you always have someone to fall back to. Make sure you come out in a very safe space and that you trust the people you come out to.