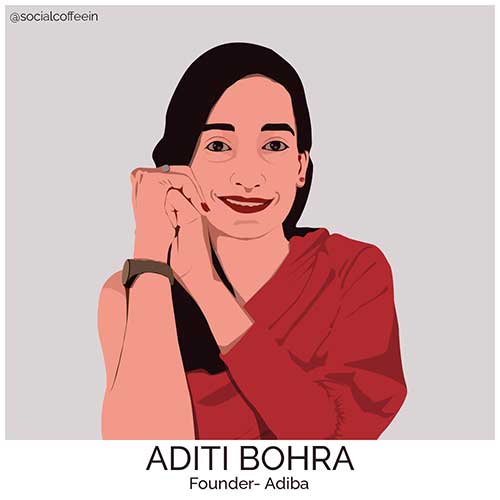 Marks don’t define you. As cliché as it sounds, there couldn’t be anything more accurate than this. the world out there is more than the numbers you get on your mark sheets. I was an average student with a fair percentage enough to pass to the next class. But I was always keen on the extracurricular activities that took place in our school.

From the very early stages, I have been around clothes, fabrics, karigars, as my mom is a designer and owned her boutique. So it always felt like my second home and a comforting area. So I decided to pursue my career in this.

I held AIR 51 in the NIFT entrance exam and passed out from the Kolkata branch. People start with internships/jobs after doing their bachelor’s, but I always knew I had the entrepreneurship skills in me. So my next step was to establish my brand.

The initial days were a bit of a struggle as I was new to this. Finding good karigars, and making them understand the entire process and my thoughts was a bit challenging but I got a hold of it later. Everything was running smoothly, in fact, one of my designs got so much attention and sales.

There came the next stage, I got married to a wonderful man but now I was shifting to a whole new city, a city I haven’t been to before or even thought of doing so. I shifted from Kolkata to Jodhpur and everything changed for me.

The cultural differences, the way of living, everything was so new to me but that didn’t stop me. Though I was terrified but thrilled at the same time. The pandemic came as soon as I shifted which gave me no time to explore.

As soon as everything started to get back to normal, my mother in law took me to the cloth market and showed me around. She helped me set up my business here. I don’t think it would’ve been possible without my family’s support.

I believe that you are your own limit. If you want to do something, no change of place, people can come between that.