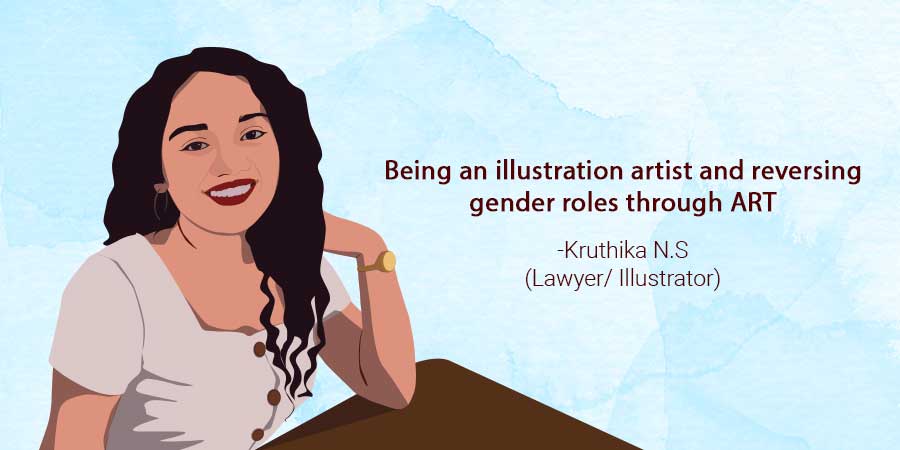 “We’re stuck in the spiral of capitalism where we forget what we actually are into.”

I graduated from law school in Calcutta in 2017 and like most people, I joined a corporate law firm. I’ve been into art since childhood though I completely lost touch after middle school. But after I started working it got to me how much I loved sketching, poetry, and different art forms. In the middle of breaks, I would doodle and scribble on pages and put them on everyone’s desks which was pretty fun back then. I got saturated with it after working for some time as there was nothing outside of it for me to do. I made a social media page and started my journey as an illustration artist. The page grew organically, something I wasn’t expecting. In law school, I focused on the intersection of gender and law, and carried these thoughts over to my work in sports policy, where I now focus on how gender norms play out in sporting society. This is reflected in my art as well. As it got more politically charged, it got to more people.

The Polis Project- ‘Her story’

In October 2018, when the first “Me Too” case was reported and it got into the public eye. There were multiple instances when the survivors were being harassed merely for speaking out. To make sense of things, I came up with a graphic essay which focused on who we are as a society to be treating women like this. I remember being on a bus from Gokarna to Bangalore while I came up with the manner of depicting something as abstract as repeated pain. The ride was terrible, and each bump on the road resulted in a blow, and each came at such alarming frequency that even before I could recover from one, there came the next. That is what gave me the idea of connecting graphic arrows with oppression. It was a strange thought and I decided to do it because that’s what art is. You make what you feel.

We approached many people to publish the ’#MeToo’ piece, some people liked the idea but they weren’t ready to put it on their website as it was ‘heavy’ content. Others weren’t interested in the comic strip. I thought about it and decided to just publish it on my own medium because we had nothing to lose as artists. This allowed me the opportunity to collaborate with The Polis Project. Polis was making a series on the #MeToo movement at that time and my pieces seemed to fit perfectly for that. That’s how I got a platform. They asked me some questions which made me realize certain things. I changed it myself without them asking me to do so. I used to sketch on paper earlier. Later one of my friends, Apoorva who collaborated with me on the piece, taught me how to use Coreldraw and Illustrator and introduced me to the whole world of software. I was very overwhelmed with the fact that I no longer had to sit and scan people.

Sports and Law Go Hand in Hand for Me

I still am a lawyer. Currently, I work at a law firm which focuses on sports law and policy. Sports is something I am extremely interested in, not because I’m any good, but because of the influence it has on society. Art and sports are similar to an extent where you get a lot of eyeballs on what you are talking about, and can move conversation to things that matter. The whole criteria of degrees and doctorates collapse when it comes to arts and sports. What intrigued me to know more about it was the difference in men’s and women’s sports, and particularly what sport has meant for women. I often question the binary in sport, why people of the same sex have to compete against each other in sports like chess, why bodies of certain women are policed, denying them from competing against other women. It’s quite a mess.

How Hozier Helped Me ?

I don’t want my art to be idealistic or unrealistic, I want to bring out the fact that we aren’t in a perfect world. Art needs to face and depict these questions, it shouldn’t just be a pretty thing in a rich house. While doing research for ‘Her Story’, I had to read about many heinous acts as well as going through the law which was mentally draining. I wasn’t in the right mental space and gave up on the project for some time, with thoughts not only on the actual stories I read, but the guilt that came from privilege. Around that time, Hozier released his EP; ‘Nina Cried Power’. I started listening to it on repeat and watched his interviews in which he spoke about the need to question those in power even though it’s difficult, and the need to put in that emotional work even if it’s the most uncomfortable thing to do. After all, the emotional work is nothing compared to what activists and survivors do every day. And yes, there’s privilege, but I have the option of using my voice or staying put, and I guess I found the better path. He makes art to its purest form. That motivated me to go back and finish ‘Her Story’. I wouldn’t have taken my art seriously if it weren’t for that self reflection. On a lighter note, he made me realize that art can be used as a medium and not only ‘fanart’.

A lot of my art is really how I am feeling that day. It’s a great way to get people’s interest in your work where they can relate with the characters and connect to the language. But for serious issues, it’s about letting the internal monologue out loud. Having born in a privileged family comes with a certain amount of responsibilities to ensure that we use our privilege to get closer to a world where privilege ultimately shouldn’t matter. Not in the savior sense but in acknowledging the fact that you are privileged, going beyond, and understanding how to interact with people, power and gaze. One way of doing it is with family and friends, and the other way is just to put out art.

A lot of my work also comes from little things that fascinate me and speak to my own ignorance. For instance, in southern parts of India, they often give filter coffee in steel glasses that have curves on the rim. While drinking a beverage from the cup, you can ensure that you don’t touch your lips on the rim such that it flows directly in the mouth. I read in a blog that the cups were designed in such a way to make sure that Brahmins could drink from it in case someone from an oppressed caste had drunk from it, when it was “impolite” in “modern” homes to show any regard for such norms. But even though the conscious thought perhaps went away, we’re still left with these glasses. It is sort of symbolic of how  we are inherently very casteist not due to conscious actions, but the structures that we continue to live in.

The whole point of casteism is that you don’t need to talk about it to get the privilege, you are just in a system where either you are privileged or not. People were blown away by the fact that we as a society are so good at hiding and not talking about the truth which has been going on for generations and we just continue living in the same way. It’s a good way to get people to respond, because I responded in the same way when I read that little piece of trivia. I didn’t really use any tactic other than literally showing them the truth through a simple doodle. Interestingly, many people asked for a printed copy to show to their elders which made me really glad that these conversations are taking place, intergenerationally to boot.

A World Outside Work

We’ve come very far from when we were children, many of us have lost touch with our interests and hobbies to progress in our work. Of course people can love the work they do, but I’ve noticed that not everyone has that luxury in the prevailing job market. People who work towards things they loved as children are the happiest. There is much more to life than a career, there is much more to it than just success in one field. I just hope we normalize the fact that people have lives outside of work. It was a long process where I found an actual interest: Being an illustration artist and a lawyer is not a common mix, but it surely helps me remain an authentic version of myself, and do what makes me feel most like ‘me’ – to bring about conversation on social issues, talk about gender inequality, and do all this through art.