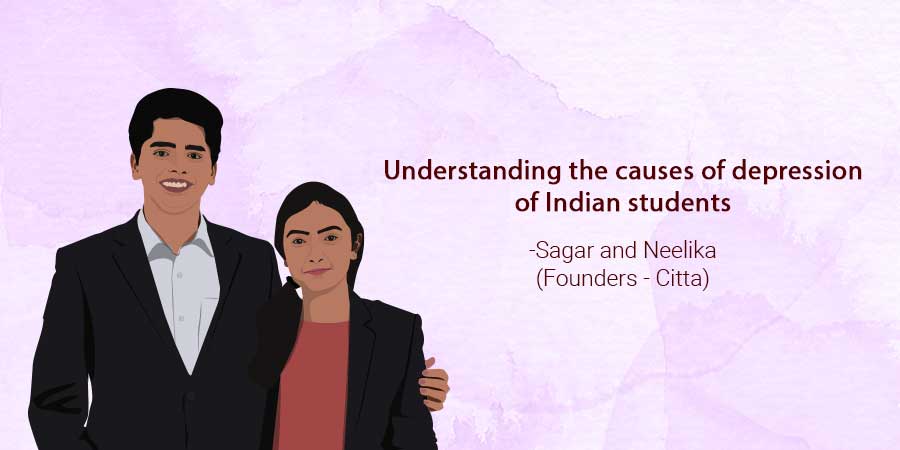 We are engineering graduates (batch of 2020) and are currently 22. We wanted to start a mental health organization focused on supporting the Indian student community. The problems Indian students face are very context specific for eg: affordability or opening up to parents. A lot of professionals have told us that one of the most common causes of depression in students are break ups. The heartbreak you have opens the floodgates for everything else, you start feeling a lot of emotions. The pandemic has resulted in a lot of break ups so we decided to cover the relationship aspect. We have also covered topics like uncertainty and productivity that were relevant in the context of the pandemic. Citta is the sanskrit term for the mind.  Our primary objective is to spread awareness about mental health & to combat the issue of student suicide.

We launched Citta in February last year. The reason we started this organization was because we have experienced the downsides of the Indian education system. We have seen our peers struggle with their mental health. We decided to go for the Social Venture Challenge at Harvard WorldMUN in Spain. We explained the situation of indian students and they really liked the idea, which landed us the seed funding and the Resolution fellowship.

Citta is the sanskrit term for the mind. Our primary objective is to spread awareness about mental health and to combat the issue of student suicide. We want to open a conversation and to bridge the gap between indian students and mental health professionals. We do this through various channels. We contact professionals who are specialized in young adults and teenagers. We bring them on board and discuss with them if they would offer therapy at subsidized rates for students. On a case to case basis we also sponsor therapy for students who cannot afford it at all. We operate through offline and online mediums. Before the pandemic, our plan was to conduct workshops and to go to schools and colleges and check if they have an in-house counsellor. But we could only conduct one and the pandemic hit us after. Firstly we have to remove the stigma through awareness.

Different social media campaigns and workshops are conducted for different target audiences, i.e students, parents and teachers. We have to keep our instagram active and give students all the information they require. We have to reply almost immediately due to the nature of the texts. It took a fair share for us to adapt to all of this. We took training from professionals who advised us not to get too worked up every time we talked with someone regarding their issues. We ensure that all the content we put out on our social media is vetted by mental professionals.

A lot of professionals have told us that the most common causes of depression in students are break ups. The heartbreak you have opens the floodgates for everything else, you start feeling a lot of emotions. The pandemic has resulted in a lot of break ups so we decided to cover the relationship aspect. We also covered topics like uncertainty and productivity that were relevant in the context of the pandemic. The pandemic increased the need and relevance of online therapy which was initially not as popular as people had their doubts w.r.t it’s effectiveness. Parents have also started talking about mental health and it has started getting acceptance from older people as well. In future we want to make policies to foster better support, understanding and provisions with regards to mental health. All the professionals from the mental health community have been extremely welcoming, nobody thinks of another individual or organization as competition. Everyone genuinely just wants to help improve the community.

Till the tenth grade I was the classic stereotyped nerd but laid flat in the later two years. The competition was much higher and I was very unsure as to what I wanted to do. There was a little phase while transitioning from school to college where all the expectations piled on and I fell flat on all of them. This was the first actual time I had been subjected to failure. I wasn’t keeping in touch with anyone, talking with new people was exhausting, I used to cry a lot. It was even more difficult with everyone worrying about my future instead of telling me it was okay to fail. This feeling has been normalized but I didn’t wish for others to go through this because I faced it for a month. What about the students who are stuck in this loop and have no way out?  I knew I wasn’t the only one going through this, as the numbers showed. One student committs suicide every hour in India. Along with CITTA, I also run a venture where we help indian students become more employable for the workplace.

I am a Computer Science graduate. I enjoyed physics and maths growing up. But the moment I was subjected to JEE prep, that was when I stopped enjoying learning. The unhealthy competitive environment and the fact that teachers gave more importance to ‘’perfect scores” than gaining knowledge. The mindset was that if you don’t get into a premiere institute your life is a dead end. I had major anxiety and always felt like my parents had already invested enough in me. So I didn’t talk about my mental health struggles because I thought it would be an additional burden. I started despising school for those 2 years and went into my own shell. I would study all day long and what made things worse was that I lost  touch with my extracurriculars and had no time for recreation. 3 years later I finally decided to go for therapy. My university had a counsellor and I went to them, which was very helpful and soon after I decided that something needed to be done for the student strata.

School, family, your upbringing there – gator to the way you are brought up and shape your personality accordingly. Even as adults when you go into therapy, the professionals trace things back to when you were a kid. Everything starts from there. Individuals who bully others want to feel powerful because they are inherently insecure about themselves and thus they actively need to feel secure. “That is how I justified it reflecting back at the time I got bullied in school and it made me feel a bit better. It was very easy to pick on me, and there was nothing that I could do other than cry at the top of my hat.”- Sagar

“Cyber bullying is so tricky because the person who is trolling you doesn’t have a face.  Especially right now when individuals thrive on validation. If you ask me, cyber bullying is a more serious issue because it has a much worse impact on the mind. The fact that it is up on a public platform makes its effects all the more dangerous as anyone from anywhere can read it.” – Neelika

“I was in eight grade and uploaded a picture on facebook. Suddenly I started getting a lot of comments from friends and I took it as harmless fun but it escalated so bad that everyone from my network started bombarding the comment section. I still remember crying in my room. Facebook was a new platform at that time and I had just made an account, it was disturbing to get so much hate. My father was very active on facebook, he saw all of that and called them up asking them to take it down and that it was a case of cyber bullying. That was the first time he got an idea that I was getting bullied at school. I was actually mad at him because I had to go and sit around the same people the next day, he intervened even though I hadn’t asked him to. I did not react because that is what I used to do at school as well, not talk about it at all and keep ignoring them. If you talk about it, you have to admit that it affects you, that you crave for validation. Nobody wants to admit that.” – Sagar

“We are all addicted to social media, There’s a study that says if you get twenty good comments and one bad comment, you will end up dwelling on that negative comment while completely ignoring the twenty good ones. This is called The Pessimism Bias. We as a generation are just trying to understand what mental health is and how things we say affect each other.” – Neelika

“There are different parenting styles, like tiger parenting, cow parenting, helicopter parenting. It varies across cultures and also depends on privilege.”

“After twelfth I taught math to eighth graders from BMC schools and there was this one student whose father had a vegetable market and was given the ultimatum to join the business if he doesn’t do well in academics. It wasn’t wrong on their part, for them it was an investment and made financial sense for them. Underprivileged families look at education not as a necessity but an investment where it is going to reap you benefits after ten years when he gets a high paying job.

I feel that India will always be ten or twenty years behind the western countries in regards to mental health as we have many other things to tackle before we even talk about it. It’s still a luxury.”

“When we first started Citta we wanted to go to different schools and conduct workshops, but took a step back and thought about it. That made us realize that it wouldn’t change anything as there are hundreds of other NGOs working on the same thing. The root of evil was something else and we had to tackle that first. Which is why we wanted to talk with the parents first as they are the ones who play a pivotal role in supporting their children during their mental health journey.” – Neelika

During our Pride Month Campaign, we sponsored therapy across 23 cities for the LGBTQIA+ community. During the pandemic, most of them had to deal with major issues that stemmed from being confined with their parents. 75% of the 60-65 people who tried therapy in that month were first timers trying to open up about their struggles. Some cities had absolutely no access to assist mental health so we got them in touch with professionals from Bangalore, Delhi and Mumbai. It really helped them introspect and deal with acceptance issues and they wanted to continue taking therapy.

“We’re stuck in the spiral of capitalism where we forget what we actually are into.” I graduated from law school
Read more