ARMY PROTECTS THE NATION, TEACHERS PROTECT THE FUTURE OF THE NATION 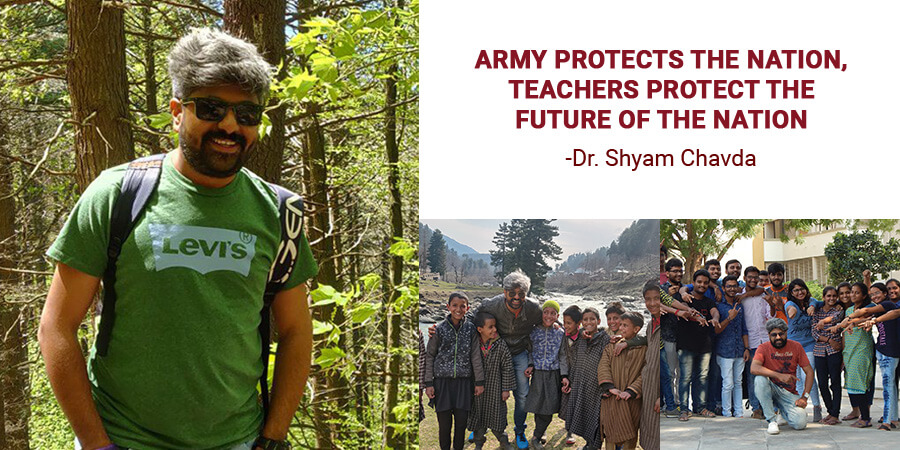 There is no meaning to your life if you can’t change someone else’s. Life has given us so much, we still extract from it to fulfill our need and greed. You are excavating so much from life, why not return something as well. The importance of the teachers, and the role they play, is much greater than one can imagine.

I HAVE A SOFT CORNER FOR KIDS:

I have been teaching programming for the last 16 years, have authored 22 books, and plan on more. A technical guy who loves kids is a rare combination. And here I am, the rarest of all. There’s a soft space in my heart for kids which is irreplaceable. I have been handling kids for a long time. Not just as a teacher who educates them, but as a teacher, they could share their deepest feelings.

Not just tuition, but I wanted to do something more than that so I decided to start teaching kids in the government schools nearby. From there I went on teaching in rural areas. I believe people should donate with their maximum capacity and in whatever form. Some can donate money, I decided to donate my time and knowledge. Both are equally fundamental.

I PUT MYSELF IN JEOPARDY, BUT IT WAS WORTH IT:

Soon I got a call from an NGO called War kids UK, asking to visit Afghanistan and help the kids that have been saved in from all sorts of wars, trafficking, and other dangerous hazards. It was a question of risking one’s own life and helping the children. I, for not even once, had a second thought before agreeing to do this for them.

Everyone around me thought I was crazy for agreeing to such a danger where I was putting myself in jeopardy. But I was affirmative and without thinking twice booked my flight. I was taking a shot in the dark but I knew it was worth it. From boarding the flight to the landing, everyone was asking whether I was doing the right thing and if I wanted to change my mind. I would have never.

As soon as I stepped in Afghanistan, it was a 40kms route to my destination, and the entire route was covered by the Taliban. The first thing my attendant said to me was ‘this is your bunker, in case of bomb blasts, you are covered with 15 days of food and water supplies.’ I wouldn’t say I wasn’t scared, but I signed up for this. I stayed there for a month helping the kids. There was a language barrier, but I think it won’t be a hindrance if you communicate through eyes, hearts, and feelings.

While there, a female activist was held at gunpoint by a father, who was forcibly marrying her daughter to someone. The girl had contacted the female activist to save her. The activist, fearlessly, looked the father in the eye and saved the girl. That was an eye-opening event for me.

THEIR STORIES WON’T LET YOU SLEEP:

The kids in the war zone are traumatized with scars almost impossible to empathize. They have been physically and mentally tortured to a level no one could ever imagine. The girls who are kidnapped never return, the boys who return, cannot lead a normal life. My heart is always heavy and my eyes filled with tears and terror. Their stories haunt me for days and sleepless nights.

Helping kids has always been my motive, then how could I have left them. That is the very moment I decided that I would leave no opportunity coming my way, to help children.

KASHMIR HAS A SPECIAL PLACE IN MY HEART:

I had visited Kashmir earlier but as a tourist and not as someone with an aim or purpose. After wandering through the roads and villages, I finally reached a school in a village in South Kashmir. I saw kids running home as soon as the bell rang, I enjoyed the view so much. The principal was sincerely happy to have me take extra classes and supported me for the same.

More than the principal, the kids absolutely relished my presence and teaching. The feeling was mutual. Now I visit Kashmir 2-3 times every year.

I am so attached to all my students, that they don’t just come to me with educational problems but also with their love life issues. I talked to their parents and so many of my students have gotten married. The importance of a teacher in student’s lives has a different meaning now. Trust me, there is no better feeling.

I believe everyone lives for themselves, but it’s not in everyone to change someone else’s. There is nothing better than bringing smiles on faces who have been tortured to death. Their smiles are more precious than mine. You don’t always have to help or donate financially. Find ways where you will be of maximum help and donate that. For me, helping kids means helping the entire nation and I won’t stop doing that till my last breath.