Voice Without Noise – We Say and Yet We Don’t 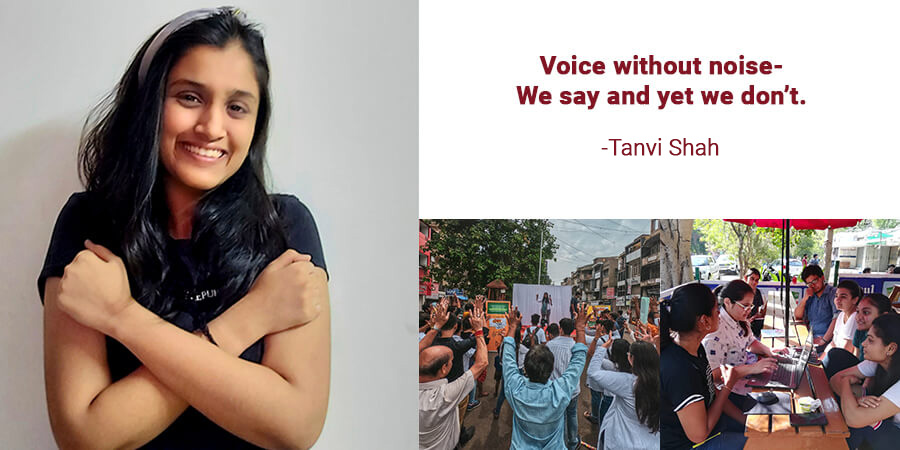 It’s so strange to even start wondering that the entire nation is dependent on the youth, while they’re out there wasting their energy trying to be cool. The millennial term has been exaggerated so much, that the young ones are now just speaking online and doing nothing for the same.

I would say that my journey started that way itself. I was once speaking in an open mic about the deaf education system, when standing there in that moment I realized that speaking about my problems and beliefs is not going to make any difference. The difference will be made when I start working on the same.

My entire family, consisting of my parents and my grandparents, have been deaf. My brother and I are the only people who haven’t. My father after completing his 10th board exam wanted to study more. But due to the lack of a deaf education system, he had to stop at a certain point. Just imagine a situation, where you have the capability but not the resources. How helpless one might feel regarding it. The reason why I took into my own hands that no matter what happens, I will not let any other person waste their talent and their will to study because they lack one of the 6 senses. From that time, I started my own venture which is known as VOICE WITHOUT NOISE. My venture is for hearing impaired students and making a smoother platform for their education. Not only for their education, but workshops for others to learn sign language for better communication.

Just because we were a bunch of kids in our early 20s, nobody was ready to believe in us, they wouldn’t even consider our proposal. We tried backing all our curriculum with existing research papers, but it was hard to believe kids with vision. Of course, why would they? But we did not stop, we pitched to more and more deaf schools every single day. Because we knew, education was the only way to shape and help those kids.

The toughest part wasn’t this. It started when we actually got the job. To win the trust of those people. I wouldn’t have either. Keeping myself in their shoes, it is always a vulnerable situation when someone comes to you with hope and opportunity that you have been looking forward to all your life, and nobody actually gave it to you.

There was a point where working and studying, both at the same time, was difficult. I had to bunk my classes to keep my venture running. There is a saying, often the most difficult dilemmas will extract what is more important to you. I chose my cause. There was a reason behind this initiative. I couldn’t let go of that reason. Even 3 days without thinking about voice without noise, felt like 3 years and no I couldn’t take it anymore.

I know I wanted this so bad that even in the future I would sacrifice whatever it takes to keep this cause of mine running. I have faced rejections so many times, if I didn’t give up at that time, why should I ever give up. Every now and then I hear stories of deaf kids who couldn’t do certain things and kept relating them to my father.

The Happiest Moment I Can Say :-

After completing a certain project, I remember, we kept an exhibition for those kids. There were all sorts of creativity coming out from them. Seeing those creative things, their parents felt so proud of them. They couldn’t believe the fact that their children had so much talent. That with the right system and curriculum, they could do so much more with their talents. The entire exhibition was supposed to be ending with one of my poetries. I remember tears rolling down the cheeks, all eyes blurry. There was no dry eye that day. The hearts were filled with overwhelming emotions and pride.

I always imagined myself to be someone working under someone. Completing my graduation, my higher studies, and working in the corporate. A shy, introverted person who couldn’t even ask for someone’s help. Who would’ve thought that girl would turn up with a vision of helping all the specially-abled students someday. That I would create a ray of hope in someone’s life, and my initiative would grow to be something of bigger importance. My mother was absolutely scared of this, she thought I would end up getting hurt as it wouldn’t work. My father and my brother were my constant support and also convinced my mother for the same.

People usually think my parents are dependent on me, but as it turns out to be absolutely the opposite. I am the one, dependent on them.