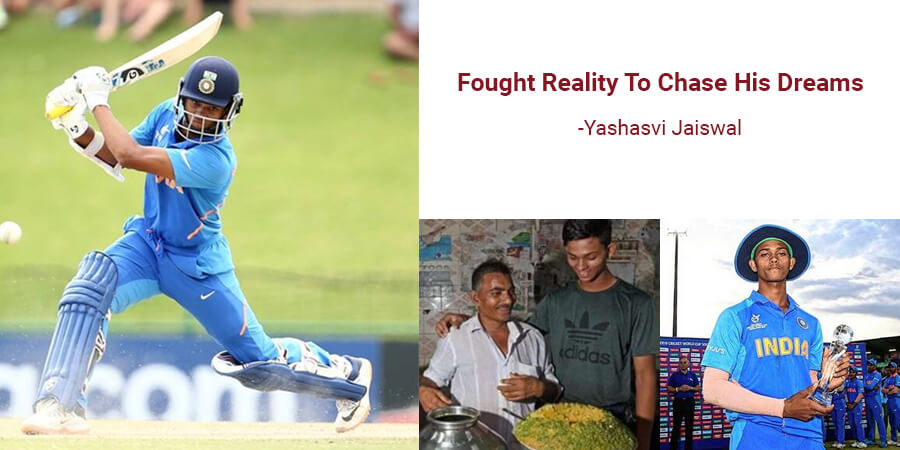 Dr. A P J Abdul Kalam once said, ‘Dream is not what you see in sleep, a dream is something which doesn’t let you sleep’. And when you have to live with a dream with an empty stomach, in a tent without electricity, where sometimes rainwater is your bed or unbearable heat burns your body, this quote becomes relevant. Yashasvi Jaiswal, an 18-year boy, grabbed the attention of the world when he was recently signed by an IPL team at 2.4 crores. Not only this,

◙ In ICC U-19 World Cup 2020, he won the Man of the Series award for scoring the highest runs in the  tournament.

◙ He was the youngest cricketer in the world to score a List A double century.

◙ For scoring not out 319 runs and snatching 13 wickets in a school cricket match, he received recognition in the Limca Book of Records.

All these achievements are just a mere reflection of the strength, the will power, and the determination he showed in his short share of life.

At the age of 10, Yashasvi moved from UP to Mumbai with an ambition to play cricket for India. His father was a small-scale shopkeeper. He couldn’t afford to rent his son accommodation in Mumbai. Yashasvi’s uncle, who lived in Mumbai, was himself struggling for a living in his small kholi. However, on his uncle’s recommendation, a dairy shop in Kalbadevi agreed to keep Yashasvi with a condition that he would also work there part-time.

But it was tough for a 10-year kid to play cricket for the whole day and then work! As soon as he returned after practicing at Azad Maidan, he went to sleep. Soon, he was thrown out of the dairy shop. Yashasvi couldn’t share his pain with his family in Bhadohi nor with his uncle. Only because, if the news reaches them, his father would take him back and his cricket dream ends there.

Somehow, he managed to find shelter in a tent at Azad Maidan. And the first thought he had was now I can start practicing right from early morning! 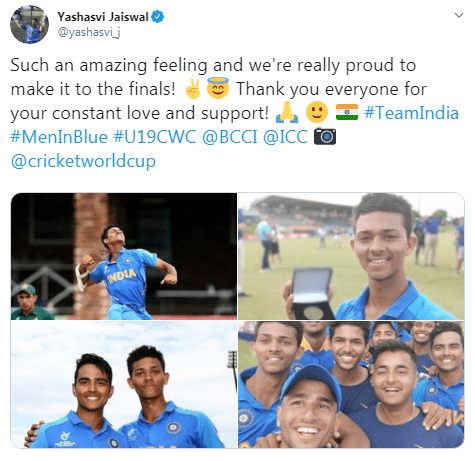 The three years, he spent in the tent, were full of fearsome adventures. If he had to eat, he had to contribute and cook his roti on his own. His father did send some money but it was never enough for his survival in a city like Mumbai. For countless nights he went to sleep without food because he had no constant source of income. He sold pani puri during Ram Leela at Azad Maidan. He used to scout for corporate matches to get a free one-time meal!

In a report by Indian Express, he recalled, “I always used to see boys my age bringing food or their parents had big lunches with them. As for me, it was — khana khud banao, khud Khao. No breakfast. Catch hold of anyone around and request them to buy breakfast.”

The youngster had only one passion, to play cricket and spend his entire life on the 22 yards. His passion brought him an opportunity when Jwala Singh, a cricket coach at Mumbai Cricket Club, noticed Yashasvi facing a senior bowler without any trouble. Singh met Yashasvi and asked him to visit his home with a file of his achievements. When Singh heard his story the next day, he could instantly connect with him as he also came from a small town to Mumbai with the same dream, but due to lack of guidance, he failed to reach the highest level.

Singh decided to support the natural talent and thereafter Yashasvi found a true guru, a mentor, and a guardian. Yashasvi was full of doubts and fears, gifted from his counterparts to ruin his cricket career. Singh helped him overcome these mental challenges, provided a place to stay, and encouraged him to only focus on his game.

Yashasvi fondly mentions that Jwala Sir has supported him a lot in his career and he has done everything for him to keep his cricket dream alive.

Today, Yashasvi has become a rising star. He could never afford a cricket kit and now he has a bat gifted by his icon, Sachin Tendulkar. His hunger for playing cricket and will power to keep pushing himself is an act to learn. His life story is beautifully summed up by Yashasvi in his own words.

When Yashasvi was asked how will he deal with the pressures of higher-grade cricket, he said, “You are talking about mental pressure in cricket? I have faced it daily in my life for years. Those have made me strong. Scoring runs is not important. I know I will score and take wickets. For me, whether I get the next meal or not, that’s important.”(Reported by Times of India)