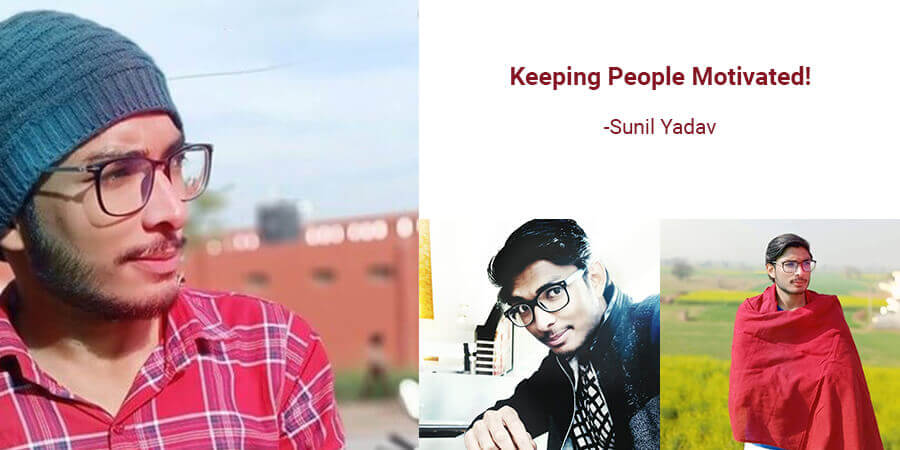 Inspiring, witty, realistic, and sometimes poetic, and revolutionary, this is Sunil Yadav SS, a 23-year-old lad who is trying to balance the stress overload in life with positive words of wisdom.

It’s hectic and sometimes unbearable! That’s how the smart human species today define their automated lifestyle. And Sunil is not an exception. He saw failures, was in depression, and almost decided to end his life. But he gave a second chance to himself, to life.

Today he owns the world’s number 1 channel on telegram, SS Motivation, where on an average 8-9 lakhs people read his motivational content. On Facebook, his page Sunil Ydv SS is followed by more than 6 lakhs people. He has won many gallantry, corporate, state, and national level awards for his achievements.

Right after his schooling in a small village in Alwar, Rajasthan, Sunil left to Kota – the coaching Nagari. He could not cope up with the constant pressure to perform and went into depression. That’s where his friends helped him to recover from the tough phase.

Again, when Sunil saw a series of failures when six of his start-up ventures couldn’t make a mark, his brother and a friend supported and motivated him to keep moving.

When Sunil saw he is not alone, but people from all walks of life are suffering from stress, anxiety, depressions, and sadness. They are not able to deal with the reality and the pressure, negativity around them is making it worse! All they need is a positive thought, maybe an inspiring quote, or a happy picture can bring a change in their lives.

Sunil had his friends and family at different stages who played the role of the real game-changer in his life. Sunil took inspiration from them and decided to start a platform where he could push out the positive, free-wheeling thoughts. And he started SS Motivation on telegram.

In the first few months of SS Motivation, Sunil did not get the desired response, but he believed in his idea of Keep Motivating People. Today, his channel has 2.5 lakhs subscribers. People like IAS and IPS officers have joined his channel. As a responsible citizen, Sunil also roles out his voice on serious social causes and moved valuable campaigns on his channel to send the right message to connected communities.

Sunil is on a mission and he is constantly working to make his content more valuable and impactful.

It’s amazing how a simple notion to motivate people can become a celebrated phenomenon. One more proof to back the idea of listening to your inner voice, do what you love, and the happiness will find your address itself.