Story of an independent woman – CSR contribution by Social Coffee 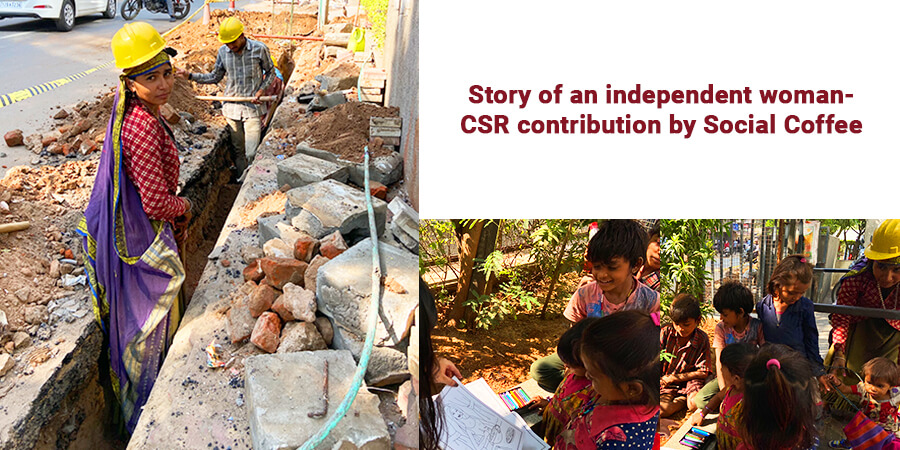 “You can tell the condition of a Nation by looking at the status of its Women.” by Jawaharlal Nehru, also one of the leaders of India’s Independence journey, and the first Prime Minister of India.

So, what is the situation of women in our country? Today, India gives a lot of opportunities to women, with them possessing an opinion in everyday life, in corporate as well as in the political sector. Although, India is still holding a male-dominated population, where women are commonly seen as secondary, submissive, and inferior to men.If you grew up in India, it does not matter which state or region- you must have noticed physically frail-looking women construction workers developing roads, railroad tracks, airports, and offices. It makes you wonder how those skeletal women work around the clock, doing physical labor, and also taking care of their children. This article covers the story of a successful independent woman in India. Also, a little CSR Team Social Coffee towards their lives- trying to make it better.

Residing in the 21st century where feminism and equality are addressed so powerfully can be very competitive. You see a woman in a saree going to work, a woman in heels driving herself to work, and you see a female laborer traveling in the back of a tempo- what would be your first impression of each of them? That the woman wearing a saree is working in a conservative environment, the woman in her heels and driving herself must be a big shot and earns a lot of money or the worker is a helper from a village who is poor and does menial jobs. Our minds are set to consider and respect suited to working women. But be it an educated independent woman, a home-maker, strong and independent woman from the rural sector, all are working and deserve the same amount of admiration. Adding to the cup, are our judgment.

Talking about our contribution or one of the CSR activities , it was more of a deed of joy and empathy. We noticed around 7-8 kids below our office sitting idle in the parking lot, all ranging from around 2-6 years old. After approaching them with some smiles and connecting through a conversation, we found out that their mothers had started working at a construction site nearby. It came to our attention that these kids were too young to be left alone. Their mothers had to travel back and forth to take care of their crying kids and also finish their daily tasks. It is a very high possibility that these kids get irritated by the heat or just by sitting idle and start disturbing their mothers. So we decided to give them coloring books and crayons to keep them indulged so their mothers could work in peace.

What we are trying to say is

We know it was just a coincidence that these kids just bumped into us on our work premises, but isn’t that what life is about? Filled with beautiful experiences and coincidence.

We aren’t saying to go out of your way to make a huge donation to an NGO or a cause, but it’s these little acts of empathy and compassion that make these women believe in humanity again. The smiles on their kids face, the giggles and excitement to see the coloring books- something that neither of us has seen. However, things are making little improvements in some portions of the country.

Women’s role in the labor force

When thrown in a situation where she must take major decisions affecting the well-being of her family, she, therefore, finds herself extremely vulnerable to exploitative people. Women make up nearly about half of the construction workforce in India. It is allowing women to make more money than traditional jobs. General duties include transferring supplies to the site. Such workers regularly go to construction sites with their kids to work for a certain amount of time.

Role of a woman in everyday life

A woman is human, a mother, a working-class who earns, a daughter, a sister, and most importantly- the most essential part of our lives.

Women are considered a liability. You often hear words like ‘tum humara bojh ho’ or ‘ladki toh paraya dhan hoti hai’. But this ‘paraya dhan’ when given the opportunities, can shine more than the sun.

But one needs to remind themselves that they are a human first. Mental health, stability, ability to achieve something in their lives is equally important for them as it is for any other man. Secondly, we need to realize the importance of a woman’s work CANNOT be determined by the nature of her work. A female CEO of a company and a construction worker- both are working women who support their family. Both of them are considered as strong and independent women. A woman working late night at a call center for her pocket money or a housemaid working to support her child’s growth and development, to pay for their education. You tell me, which one seems more important? Which job, if stopped for one day can impact their financial struggles?

How can you help?

Amazing organizations like SEWA (Self Employed Women’s’ Association) are attempting to do their share in bettering their situations. SEWA has developed a collective organization of female laborers in Ahmedabad, Gujarat. Here, they are provided on-the-job training to acquire skills varying from cleaning, transporting, and shoveling to masonry, carpentry, and plumbing -improving the situation of women in India transforming them into – an independent woman.

Thus, creating an independent women forum in the city.

Yet so many other things are needed to be done to fix a hole in this gigantic wall of discrimination.

Such efforts by NGOs are praiseworthy and required to be adopted by the government as well.